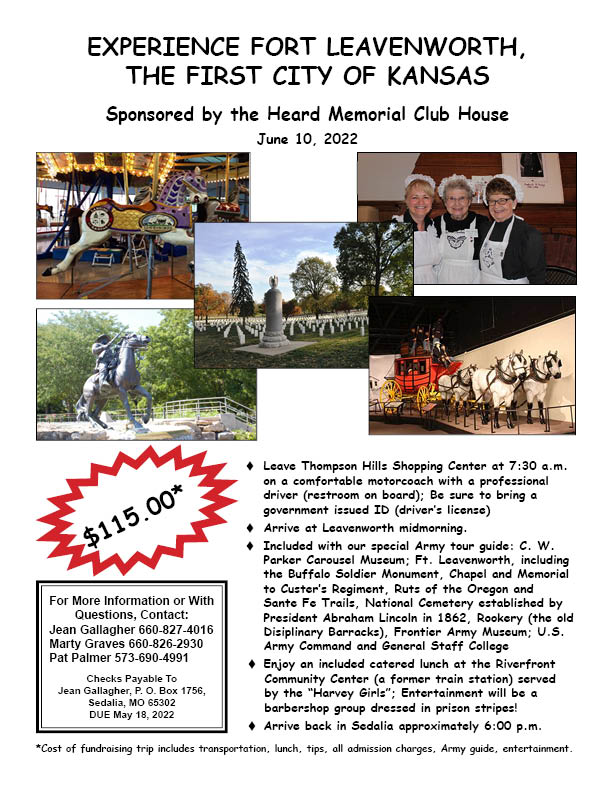 The Heard Memorial Club House board of directors will sponsor a bus tour to Ft. Leavenworth, Kansas on Friday, June 10, 2022.

The comfortable motorcoach will leave Thompson Hills Shopping Center at 7:30 a.m. with a professional driver. There is a restroom on board. A government issued ID (driver’s license or Missouri ID) will be required to enter Ft. Leavenworth property.

A catered lunch will be included at the Riverfront Community Center (a former train station) served by the “Harvey Girls”. Entertainment will be provided by a barbershop group dressed in prison stripes.

The motorcoach will arrive back in Sedalia approximately 6 p.m.

Proceeds from the trip will help preserve the Heard House. The Heard Memorial Club House at 200 West Broadway is a two-story, buff brick, classical revival house. Built in 1906 as a residence for John and Lillian Heard, the property was entrusted by Lillian Heard in 1935 for use by Sorosis Club and Helen G. Steele Music Club as a permanent club house to be used for educational and charitable purposes. This home remains close to the same design as when it was built at the beginning of the twentieth century with a few exceptions.

The Heard House board continually plans and conducts fundraising to address the needs of the Heard Memorial Club House and property. All proceeds from this event will go toward the upkeep of the Heard Memorial Club House. Recent improvements at the property include new shingles on the main house and carriage house and renovations of the exterior of the carriage house